Raheem DeVaughn Gives D.C. A Little Love Behind the Melody 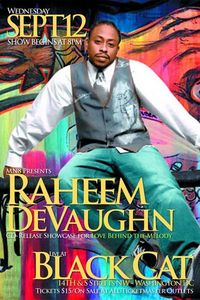 Last week SoulBounce alerted our readers to a string of concerts that Raheem DeVaughn would be having this week in Baltimore, Washington, D.C. and Atlanta to showcase songs from his long-awaited second disc, Love Behind the Melody. Well, the D.C. concert came along this past Wednesday night, and I just had to be there to hear some fresh cuts from Rah (his mixtape gems notwithstanding).

The concert was at the sold-out Black Cat, and it was thick with his fans when I got there. I made my way through the crowd and posted up about 20 feet from the stage. It wasn't the greatest vantage point, but I couldn't be too picky seeing as I got there an hour late.

With doors opening at 8 pm and Raheem not scheduled to go on until 10 pm, the crowd got rather restless. Shortly before his set started, a couple of amateur fights broke out in the back of the club. Come to find out from an eyewitness who was standing a few feet away from the melee that some chicks started fighting over a chair (a hot commodity at the SRO venue). Words were exchanged then fists started flying then one of the broads hit the other over the head with a bottle. Shortie's boyfriend came back from getting them some refreshments to find his girl slumped over and that's when round two started. He channeled his inner Muhammad Tyson and started swinging. It took damn near every puny security guard at the Black Cat to get him under control.

This was so not a good start to the evening.

That's the thing about a Raheem DeVaughn concert is that he brings out all types of people--from the thug life set to incense and oils crowd. You never know if you should wear your Egyptian Musk or a well-concealed shank to his shows.

A few minutes after the impromptu Fight Night, Michel Wright from WPGC 95.5 came on stage to calm the crowd down. That didn't exactly work. Then a staff member from the Black Cat stepped to the mic to say that there would be a fifteen minute delay due to a "situation." He was met with a loud chorus of boo's.

Thankfully, a little less than fifteen minutes later Raheem's band, including visual artist Demont Peekaso and his stellar background singers Steve Smith and Bilal Salaam, took to the stage. They started playing and Michel Wright came back to briefly introduce the man of the evening. DeVaughn came on stage sporting a phat dookie rope and a new look. His cornrows were gone and he was rocking a tight fade. But this wasn't the new cut that I was interested in, and Rah came out the box with some Love Behind the Melody freshness.

He opened with the song "Cocaine Dreams," and I was immediately feeling it. The track has an old school Curtis Mayfield vibe to it. The song was well received by the crowd, but he got a greater reaction when he segued into his older material for the next two songs. After rousing renditions of "The Love Experience" and "Sweet Tooth," DeVaughn broke out into a little James Brown and had himself a "Funky Good Time."

Raheem then took us to the present with another cut from LBTM.  The upbeat "Energy" kept the audience moving and grooving with its funky music and catchy lyrics. I can already hear a house remix to this cut (someone needs to make that happen). Take a look and a listen for yourself:

After funking us up, he then slowed it down with some new hotness with the song "Marathon." This is one sexy track that will definitely be on many a slow jam tape iTunes playlist this winter and result in a few babies born in 2008. Raheem kept it in the bedroom and took us back with one of my favorite jams of his, "Ask Yourself." Yeah, he had us ladies swooning with this one.

But he really got our attention when he dropped his new single "Woman" on us. I personally think that this is a great track to get him back in the game for this second CD. It's a head nodder and you can get your two-step on to it. Here's my footage of "King" Raheem singing an extended version of the song:

The next, and what turned out to the last, new track that Raheem shared with us was a work-in-progress entitled "Mo Better." This was a sweet slow groove filled with meaningful lyrics. I truly loved this song and was just trippin' that this WIP sounded better than 95.5% of music being played on the radio right now. Damn. Shame.

Raheem ended the show with three of his most well-known tracks from The Love Experience. He came out of his shirt during "Believe," put us in the pocket with a little go-go flavor on "Guess Who Loves You More" and closed out the evening with a lush version of "You." D.C. showed DeVaughn lots of love at the end of the night and it was well deserved.

Raheem definitely partied like an R&B hippie neo soul rockstar Wednesday night. The music from Love Behind the Melody sounds like it is the perfect follow up to The Love Experience. There will be no sophomore slump for him. He hasn't missed a beat with this new material. Love Behind the Melody hits stores on November 27th.

View all of my concert videos here:

(*New tracks from Love Behind the Melody)


TAGS:  bilal salaam", concerts, Demont "Peekaso" Pinder, love behind the melody", michel wright, raheem devaughn, review, steve smith, the love experience", videos, wpgc, youtube
Previous: Mixtape Roundup: The One Thing You Can Always Count On Every Friday Next: I Was (Sorta) There: Confessions of an Ambivalent Twitterer