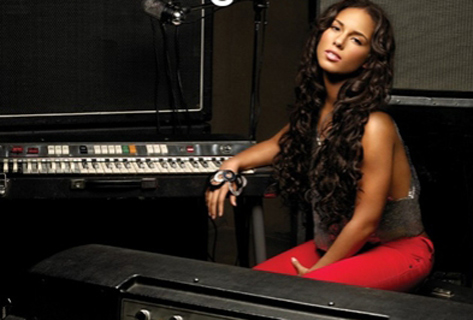 Disciples of neo-soul diva Alicia Keys can count on a whole new flavor when As I Am drops Nov. 13. "I just was really adamant about doing things that were not expected," the ivory-tickling wunderkind told the New York Times recently. For her third studio release, Keys is aiming to shake things up by offering a rock 'n' soul of sorts, adding shades of U2 and other rock mainstays to a mix she describes as "rebellious."

That can't be anything but a good look.

Alicia's certainly kept it moving over the last few years, as a live album and film roles in Smokin' Aces and The Nanny Diaries have all been welcome additions to her lengthy list of successes. And her newest single, "No One," is already creating a buzz: The groover is this week's Hot Shot Debut on the Billboard Hot 100 at No. 71, with a major leap expected for next week.

Through it all, people can expect a new, more honest Alicia to put it down. "And I'm done with being a person that doesn't understand themselves because it's being detrimental to my health and my spirit and my mind," she told the New York Times. "Everybody's in trouble now because I will tell it like it is."

Alicia Keys: "No One"

A Neo-Soul Star as She Is: Nurturing Her Inner Rebel [NYT (sub req'd)]