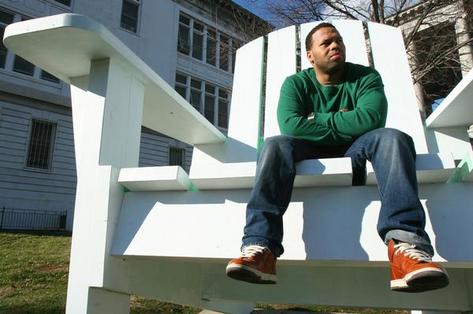 If you've been keeping up with Eric Roberson (and Lord knows that I have) then you should know that he's currently on tour in Europe with opening act Anthony David. For the past couple weeks, Erro has hit up stages from London to Paris and today he'll be performing a very special concert in Amsterdam at the legendary Paradiso. And just what makes this concert so special? It's gonna be webcast live online at FabChannel.com at 4:30 PM EST!

If you have never been to an Eric Roberson live show, then 1) slap yourself and 2) make this your opportunity to see the man in action, albeit on your computer. Take it from me, I've seen Erro in concert six times in the past year (yeah, I got it bad) and nothing beats the real thing. Trust. But I can guarantee that this will come pretty close. So come 4:30 PM on the East coast and 1:30 PM on the West, tune out of work and into the Eric Roberson live concert webcast. You can thank me later with large, unmarked bills.

Next up for Erro and Anthony are a series of concerts in Japan from October 26-28, 2007. Konichiwa, snitches!

Check out how Eric Roberson put it down back in 2004 at the Paradiso:


TAGS:  eric roberson, webcasts
Previous: Send Us Tips! Next: Mixtape Roundup: The Soundtrack of Your Weekend