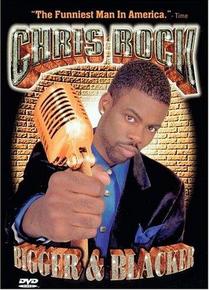 It's refreshing to hear someone that's actually from the Hip-Hop Generation not come off as an apologist for modern mainstream Hip-Hop. However, does Chris Rock take it too far with his recent statements to Rolling Stone?

"Music kind of sucks. Nobody's into being a musician. Everybody's getting their mogul on.  You've been so infiltrated by this corporate mentality that all the time you'd spend getting great songs together, you're busy doing nine other things that have nothing to do with art. You know how shitty Stevie Wonder's songs would have been if he had to run a fuckin' clothing company and a cologne line? ... Rap sucks, for the most part.  Not all rap, but as an art form it's just not at its best moment. Sammy The Bull would have made a shitty album. And I don't really have a desire to hear [billionaire] Warren Buffett's album - or the new CD by Paul Allen. That's what everybody's aspiring to be." [HHDX]

Let us know in the comments.


TAGS:  chris rock"
Previous: Keep Your Ears Warm With Some Hot New Music Next: BlogBeat: Christopher Williams Used To Be The Man

Morning Soul: Meet Me In The Trap