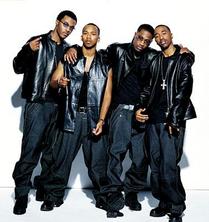 Anyone that knows me is aware that I'm quite the fan of 90s-era Bad Boy, so it goes without saying that 112 was one of my favorite acts of the time. The first three albums were classic material, but the two post-Bad Boy joints, not so much. In fact, if you were to combine the good songs from Hot & Wet and Pleasure & Pain, you'd only have half of a good CD. Diddy caught a lot of flack in his dealings with 112, but I strongly suspect that the superb execution of those early releases had a lot to do with his finicky, questionable leadership.

That probably wouldn't be the case these days, and I'm not sure linking up with Irv Gotti will yield anything better.

Granted, Lloyd's last album was surprisingly listenable and well-executed, but 112 is at a point where they need to drop some serious grown folk's music. My fear with the Murder Inc. partnership is that Irv will do to 112 what Diddy did to New Edition-- try to make them sound "younger". Considering that 112 is an act from the South, it can probably be assumed that crunk- and snap-fortified tracks will be a priority, as well as the requisite "flavor-of-the-month" guest spots that are currently dominating the charts. 112 featuring T-Pain and Lil' Wayne is not only cringe-worthy, but extremely likely.

To say the least, I'm not excited by this return. I still got love for 112, but I'm giving this new partnership the serious side-eye. Here's hoping Irv and the fellas prove me wrong.