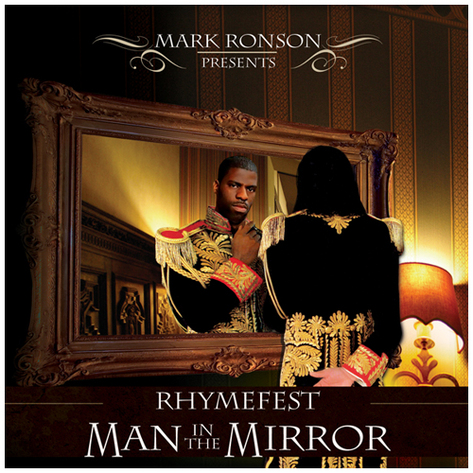 Look, we kinda dig Rhymefest. His "Angry Black Man On the Elevator" with Lil' Jon was the jumpoff. Amazingly. And, "Jeff N Fess" from Return of the Magnificent? Bad-ass!

In a couple of days he's dropping the Michael Jackson "Dedication" mixtape Man In the Mirror. [SIDEBAR: Which is worse? Looking in the mirror and seeing Michael Jackson? Or seeing Rhymefest? You only have one choice.] According to a boasting Myspace bulletin, don't go thinking he "did some cheesy sh*t; you know...just rapping over Thriller, Billie Jean, the standard classics. Oh no, my brothers and sisters: we dug in the archives for this one."

His boastfulness doesn't end there:

Let it be known: This is the first dedication album ever made like this. Anybody else who attempts to do it is a f*ckin' biter.

Ruh-ruh. Looks like someone hasn't heard The ARE's joint with Oh No and Kay. I'd venture to guess a lot of people haven't. So hop on over to FWMJ to download it. Then login to Myspace and send Rhymefest the link. He'll thank you, and the rest of us at Card-Pullers, Inc™.

Not for nothing, but I also want to point out JJ Brown's Re-Release Therapy, which took the vocals from Ludacris' Release Therapy and paired them with Jackson 5 beats. It's a mash album, not a "dedication", but it's flawless, superior to the original, and worth a mention. Some of us at SBHQ are feeling a little apathetic towards what we've heard from Man in the Mirror, but we understand Fest's game. He's a rapper; the boasting is par for the course.

Either way, I'm looking forward to it, because anything that uses old MJ beats can't be that bad. And also, Mark Ronson! Hello?