These Jackson Reunion Rumors are Encroaching Upon My Blog Steez 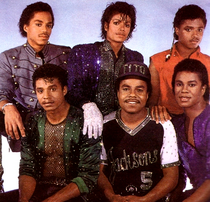 Are all the Jackson reunion rumors part of a diabolical plot by the Jacksons themselves to keep their names on our lips and in our blogs? With so much conflicting information floating around, one can't help but wonder (© Carrie Bradshaw) if they all got on a conference call and decided to collectively f**k the media, or even worse, didn't get on the phone at all!

If you've been following SoulBounce, you already know what we've collected over the past few weeks:

1) Rumors of a reunion tour started circulating because of hopeful promoter Leonard Rowe, who said the brothers and Janet were ready.

2) Jermaine Jackson "confirmed the rumors", even going as far as saying Michael would be a participant. Funny, Jermaine always seemed to be the most level-headed in spite of this.

3) The rumor saying Jermaine Dupri only wants Janet to appear in a few shows because she's working on her new album and is "also wary of having her be associated with Michael because he's gotten such bad press and is just freaky" surfaced.

Try reconciling all of that with what follows. Pull out your chalkboards, chirren!

4) The following item is in direct contrast to Point #2:

The news of Michael Jackson joining up with his brothers for dates on a much-anticipated 2008 reunion tour may have been a bit premature. According to a source from the offices of the Gloved One's spokesperson, Raymone Bain, as of yet, MJ has not agreed to reunite with the first family of R&B and pop, the Jackson 5. "That doesn't seem to be happening," said the source.

It was Jermaine Jackson himself who sparked the rumor... Jermaine's spokesperson and lawyer Vicki Roberts has since released a statement saying, "Regarding a possible Jackson 5 reunion, I've been advised by my client that the matter is under serious discussion and we look forward to being able to report more about it in the near future." [VIBE]

The good thing about that is, at least it acknowledges that Jermaine was on some other ish.

In what will surely be a major coup for Atlanta, Island president of Urban music Jermaine Dupri plans to bring the newly reunited Jackson 5 (Michael, Marlon, Jermaine, Tito and Jackie) to Atlanta for his big New Year's bash at Studio 72. Jermaine made the surprise announcement on his radio show on V-103 over the weekend. He plans to empty out the club as the Jackson 5 descend from the sky in a helicopter. The Jackson 5 will then join sister Janet Jackson and Jermaine as they enter the club. Of course pandemonium will ensue as everyone attempts to get back inside. But it will be a night to remember! [Sandra Rose via Idolator]

Okay, so this means one of two things: Jermaine Dupri never said he didn't want his sister around MJ and that rumor was a bunch of hooey. Or, he found out that someone spilled his tea and is doing damage control.

Assuming this new revelation is the truth (OMG, there's audio and a ticket page for it!) it doesn't exactly conflict with Point #4 in that this is one appearance and not a full tour. However, the fact that any of this "absolute" information is coming from the mouth of a Dupri and not a Jackson has me activating SIDE-EYE 2.0.

So what's the deal? Which Jermaine is the real spokesperson for the Jackson family? And are the Jacksons still lying about stuff? I thought the 90s were over!

Recount the complete, thrilling saga from the beginning.