Battle of the Beats: The One in Which Erro Wins, Sight Unseen 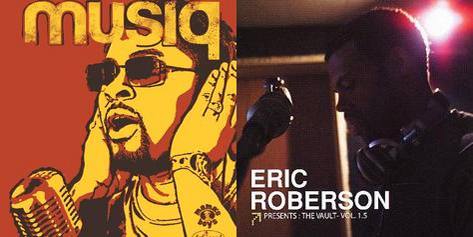 Look, it isn't my style to just jump out there and claim a victor in the title, but we need to be real about this.

This is the last Battle of the Beats for the year, and while it isn't the showdown that Jill vs. Chrisette was, both of these tracks have muscle. In one corner is Musiq with "Dontchange", one of his biggest hits. A song that the radio and your next door neighbor beat into your consciousness until you knew it verbatim, whether you wanted to or not. You have to hand it to Musiq, the ballads usually chosen for singles are formulaic and inferior to what's actually on the album, but they always inevitably chart well.

At the other end is Eric Roberson's classic "Change For Me", also a big hit if by independent standards. Any DJ worth his salt has at least one version of this song. (Check out this video of him performing it live. I was there, and so was Butta, who was holding the camera and screaming like a mad woman.) The crowd goes nuts whenever this song comes on, whether Eric himself is performing it, or if it comes up in the selection at the club or a party.

The similarity is that both tracks are urging a woman not to change who she is for either of these guys. Who do you think really means it?

This is an extra shady BOTB, seeing as how Eric penned Musiq's "Previouscats" from the Juslisen album.

Eric Roberson: "Change For Me"


TAGS:  audio, eric roberson, erro, musiq soulchild"
Previous: Mel B. Is ‘The One That Got Away’ From Johnta Austin In New Video Next: The Bounce-Bot Has Taken Over!!