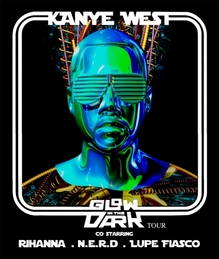 Here's the bright, shiny poster for Kanye West's "Glow in the Dark" tour (click to enlarge), that employs the same retro-futurism that has been his visual identity since the course of The Graduation began. At once we recognize how the typography and double-border recall old Star Wars posters, but beyond that there's the rendering of the Louis Vuitton Don himself, which is a bizarre mix of the T-1000 and all those hokey experiments by Vera and Ross Webster in Superman III, which many of us regret ever seeing.

The inclusion of N*E*R*D and Lupe Fiasco on the tour was to be expected and hopefully there will be some serious CRS action on stage. But we have to unleash SIDE-EYE 2.0 because one of these things is not like the other. Perhaps recent Bad Boy signee Janelle Monae might've been a more logical choice?