Lenny Kravitz is Excited About Things and Stuff! 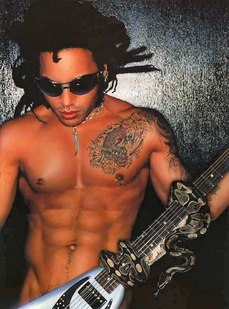 Since Lenny Kravitz isn't getting laid much these days, we'll simply have to settle for updates that relate to actual music. *sad face* In a recent NYT article (playfully ripped to shreds by Gawker), Lenny offers his humble endorsement of Sharon Jones and The Dap Kings.

I don't think of music in terms of retro; that word has always been strange to me. If someone likes to make music with real instruments and record it in a pure way it's called retro, but to me it's just music . . . I like how they're doing a Motown-Stax thing, they got their own house with a recording studio and they're really exploiting their sound. They put out 45s on vinyl, and I'm totally jealous.

He also wants to record with Paul McCartney which is, at a minimum, noble to us since Sir Paul was excised from Will.I.Am's blasphemous remake of Michael Jackson's "The Girl is Mine". Having come into possession of a mixing desk used by The Beatles, Lenny thinks it'd be pretty cool to duet with Paul. We wonder why it hasn't already happened since it's not too early to call Lenny a living legend himself. Or you can just ignore all of the above copy and gaze at his killer abs. Your choice.

His eighth studio album It's Time for a Love Revolution hits on February 5th.

Sounds That May Remind You of Something, or of Nothing [NYT]
Lenny Kravitz's Paul McCartney Duet [M&C]