A ‘New AmErykah’ Is Finally Here 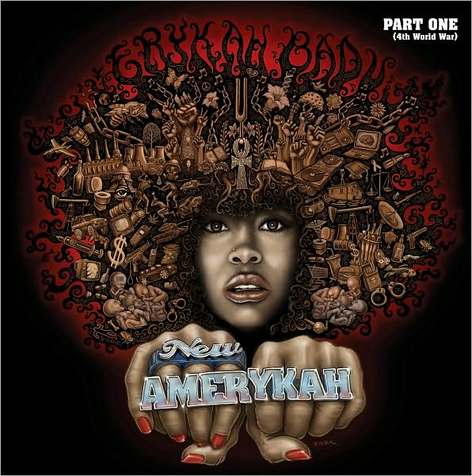 Du Day is finally here. Now that the longing and patience has finally paid off with your iPod vibrating with the excitement that only good, new music can bring, comes time to reflect. Not about whether the album is dope or not, because you already knew it would be from the moment you found out New AmErykah: Part One (4th World War)'s release was imminent. Now is the time to reflect upon why you like it. In my experience, every Erykah Badu album must be digested in five distinct stages:

First of all, let me just start off by saying that the five-year wait between Worldwide Underground and New AmErykah was worth it. In Erykah's own words, she released this opus when "it is well done, cooked, and ready." In a musical landscape so populated with troubled talent, it is so refreshing to know of someone whose sabbatical from recording is self-imposed as opposed to court-mandated or a good old-fashioned case of craziness. D'Angelo and Lauryn, I'm looking at you.
In any case, like every other Badu album, New AmErykah starts off with a cautionary tale that is all '70s funk and cryptic messages about the American dream as too many may know it: lust, greed, and self-hatred. It sort of sounds like a sped-up version of this old Sesame Street cartoon.
From this point on, the references to the Nation of Islam ("Me"), Rastafarianism (Madlib-produced "The Healer"), and The Khemetic Legacy ("Twinkle") continue, but the messages can get lost in the music if you want them to. To Badu's credit, much of this album manages to sound like something you've heard before (her cover of Eddie Kendricks' "People Get Ready" on her "My People"), yet something ahead of its time simultaneously. A good case in point is her track "That Hump." Slow and steady, almost to the point of sounding screwed if it weren't for the bluesy organ, Erykah talks of wishing she could get over the hump of living check to check and just fly away.
Erykah Badu: "That Hump"


Speaking of flying away, Erykah also shines on personal favorite "Telephone," which is about the death of a loved one and her wishing him to "Fly away/ To heaven, brother/ Save a place for me." It is truly a haunting and beautiful track that I'm assuming is about J Dilla's untimely demise two years ago. You hear Erykah letting out something particularly deep emotionally as she sings the last word on this track, and draws it out until her breath is almost gone. The result is organic and heartfelt. Touching indeed.
Erykah Badu: "Telephone"


Another personal fave is "The Cell" which spins a web of intrigue surrounding what sounds like a standoff between a crackhead and the police. Sort of like The Wire, if set to music. Really funky music. This beat on this track reminds me again of something I've heard before, namely "Contusion" from Stevie Wonder's Songs In The Key Of Life and "I'm Digging You Like An Old Soul Record" from Meshell Ndegeocello's debut album Plantation Lullabies.
Erykah Badu: "The Cell"


Thankfully, Erykah forgoes the cameo-studded album route that several of her contemporaries have resorted to which only served to these artists' detriment. She does, however, have guest appearances from fellow Soulquarian Bilal Oliver, as well as production credits from the aforementioned Madlib as well as 9th Wonder. Longtime-musical director James Poyser's sound is ever-present on this album as it was on the previous ones. Poyser's presence helps the listener to have an anchor to hold on to as many of the songs have transitions and segues that add, rather than deflect, from the original composition. Check "Master Teacher" to hear this in action.
Erykah Badu feat. Bilal: "Master Teacher"


This album, while experimental-sounding at times and full of politically leftist viewpoints, is truly a testament to her talent that Erykah is able to capture the interest of so many who really have no idea what she may be talking about. It is often said that music helps one's message go down smoother than if it were merely spoken. I'm sure this was Erykah's intent. Whether the masses will catch on to her lessons is left to be seen, but in the end, the groove will be all that matters.
Much as how this album began is much the way it ends. The super-crime fighting/70's blaxploitation music fades back in, and after a slight pause, "Honey," the first single from the album, starts to play. This song seems very out of place on this album, especially with its feel-good message of "I'm in love wit' you." Perhaps this signals a hint as to what New AmErykah Part Two: Return of The Ankh will sound like. Knowing Erykah, now five albums deep into a eleven-year career, the world may never know. But we'll all bump it just the same.