Ill Mami
March 26, 2008 | 2:00 pm
0 comments
The writers strike has been hard on all of us. And now that it's over, I don't know what's worse: the many unemployed writers or the cheapness of the networks who refuse to utilize the creative talents of the ones that are employed. The answer to the lack of new shows has been to either bring back new versions of old shows we once loved (I swore I saw $25,000 Pyramid on the other day) or to continue to trend of concocting some of the most ridiculous (un)reality shows ever to be greenlit by network executives.
Here are a few for your consideration in order of ascending idiocy/ignorance: 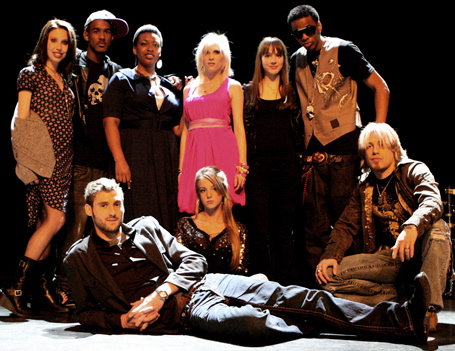 First up is MTV's Rock The Cradle, which pits former pop stars' children against each other to see who of them actually has talent beyond maxing out credit cards or sneaking into late-night hot spots. Sure, both the crazy dude from Twisted Sister's and one of The Doobie Brothers' kids are both on the show, but we're most interested in the spawn of Bobby Brown, MC Hammer, and Al B Sure! Landon Brown, A'Keiba Burrell, and "Little Al B Sure!" who is not to be confused with Diddy's stepson who I always called mini-Al B Sure! in my head.

Next up is the VH1 new reality series Miss Rap Supreme. I initially begrudgingly watched The (White) Rapper Show, but then I really began to like it. I was even rooting for Persia and was sad to see her get booted for forgetting her rhymes 30 minutes after she wrote them. It's nice to see that the producers of the White Rapper, the Egotrip squad, are interested in honing the talents of undiscovered female rappers. Or are they? If I'm not mistaken, Khia, from "My Neck My Back" fame is one of the contestants. If you hated that song as much as I did, then you'll be rooting like me to see her kicked off. But she may have what it takes, along with the nine other contestants fighting for an equal place in the male-dominated rap scene. MC Serch and Yo-Yo will be judging the ladies weekly.

And lastly, the most ignorant thing I've seen since last watching BET, comes a trailer for Suge Knight's Apprentice-style trailer to his reality show Unfinished Business. Follow Suge as he avoids questions as to whether he hung Vanilla Ice over a balcony "Big Red"-style and attempts to find "the next rap superstar" for his fledgling Black Ball Records label. I'm not sure as to whether he's referring to his nether regions or the fact that he's been black-balled from the music biz since his antics are more than well known. Despite this trailer showing fights in the Black Ball offices, lots of unnecessary swearing, and a ton of bad weaves, this show has not been picked up by any network...at all. But with the high levels of foolishness going down in this clip, I'm sure BET would love to add it after Hell Date.

TAGS:  al b sure!, bobby brown, diddy, khia, mc hammer, mc serch, suge knight", yo-yo
Previous: Maurice Joshua Has the Mojo Next: ‘Come On & Go With’ Teddy On His Birthday