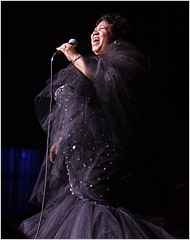 ...according to NY Mag's Vulture blog, that is. The Queen's (and don't you forget it) progeny appeared as the segueing act between Franklin's sets at a Radio City Music Hall show over the weekend. The NY Times was gentle in citing Kecalf Cunningham's appearance, if only for the sake of the concert review's completion: "...her son Kecalf Cunningham, a Christian rapper, ...came with a backpack, a hoodie and some cheap-sounding recorded tracks. After what felt like ages, it was a relief to have Ms. Franklin return, energies renewed, to belt out 'Chain of Fools.'"

The folks over at Vulture would go on to scour the web for any information or media to put Mr. Cunningham into conext:

Cursory research suggests the possibility that Kecalf Cunningham may actually be the Shaquille O'Neal of Christian rap -- that is, he's been allotted rap resources for reasons other than rap aptitude. He doesn't have songs on iTunes; he doesn't have songs on MySpace; no images of him appear on Google Image search or on Flickr; "Kecalf Cunningham rap" produces nine hits on Google. Perhaps one reason he's not down with Internet music distribution is that, as far as we can tell from biographical clues, he's at least 37 years old.

A Christian rapper who came of age in the late eighties ... there's a lot of potential here. We could be talking some serious, sub-"Rapper's Delight," "hippity hoppity bippity boppity and you don't stoppity"-level shit, only with 100 percent more Bible talk. Did you see the show and write particularly egregious lines down on your hand? Let us know in the comments!

Amazingly, the feedback offered more than just insight into Cunningham's less-than-stellar performance. It appears a lot of people were unhappy with the show overall, including the performance of Franklin. What follows are "real-life" examples of the levels of pissivity engendered by the show:

"I was in the show on Friday and I'm sorry to say it sucked. There were a lot of dissapointed funs in the crowd... If you read the NYT article you can see the lack of enthusiasm. They were just too chicken to say the truth out loud."

"Money should be refunded if an artist allows her son, who lacks talent, to instead 'rap' instead of her singing. Patrons should spread the word to not support Aretha Franklin or her son until she respects her fans. I would have thrown tomatos at Aretha and her son if that was acceptable conduct. However, I hope that my commentary has the same result."

"Holy shit, what a bad concert."

"Her son was but icing on the cake of perhaps the worst concert I have ever attended. She barely performed her songs, the pacing was atrocious, the backup singers drowned out her voice and her stage patter annoying. Perhaps the only redeeming part was its brevity- what a ripoff. I knew the audience was in trouble when she started the concert with a Jackie Wilson tune rather than her own song. Simon Cowell would have dismissed her from American Idol."

We've never had the pleasure of attending an Aretha Franklin show; we'd simply rather enjoy her from a distance so as not to ruin the amount of respect we still have for the diva. However, we'd be lying to say we didn't enjoy her legacy of reliably bad PR. If Aretha didn't cut up and piss people off, it'd almost be like she's given up--on herself and on us. What would the world be without Franklin's sass and maddening personality? A boring, antiseptic one indeed.

Oh, and HAPPY BIRTHDAY, RE-RE! We hope you aren't reading any blogs today. 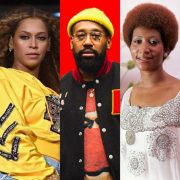