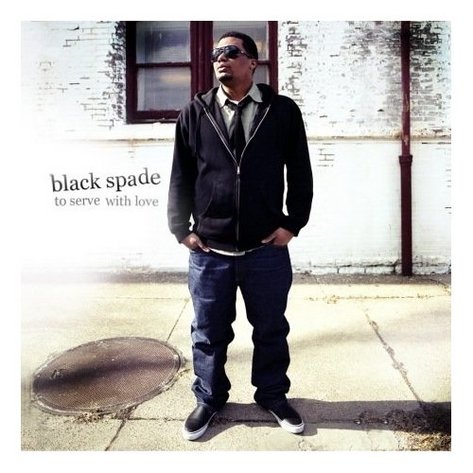 Black Spade's debut album To Serve With Love, released yesterday, has been racking up accolades since his four-track Loves Right Here EP dropped last November. He was featured on Soul Bounce last week as a First Spin, and despite the underwhelming response, Black Spade is someone whom you really should get to know. Why?

He will also, like Kanye West before him, likely be a go-to producer for those artists wanting accessible, yet eclectic beats. He is accessible much in the way in the way that Common, another Midwesterner like Spade and Kanye, may rhyme about love or beating your ass for breaking into his crib, but it is always done in an introspective way that manages to create a visual landscape for the listener. Too few emcees these days are able to incite imaginations with their listeners. They instead take the quick route of only rhyming about the surface, not the murky confusion that lies beneath.
It is with the painful emotions that we have all experienced that Black Spade shines brightest. Remember the love you had to let go? And then let go again? Kind of like the love Anita Baker described on "Same Ol' Love," except it didn't work out at all. Utilizing a banging synthesizer beat along with his baritone, Spade also utilizes the "wrecka sto" Under The Cherry Moon reference to unexpected and hilarious effect.
Black Spade: "Evil Love"

Spade continues to prove that grown men, and rappers at that, can sing love songs about real love, and not just express their reverence for females' anatomy on "She's The One (20's Love Song)." The horns that float and form the basis for the beat are pre-be-bop jazz, and evokes thoughts of smoky, dimly lit cafes gazing into the eyes of your beloved.
Black Spade: "She's The One (20's Love Song)"


Enough of the love, though, right? This is a hip hop album, so let's get to the thick of the boom-bap. "As We" uses Marvin Gaye's "Distant Lover" splendidly, as I am particularly wary of beats being made from soul classics of the caliber as "Distant Lover." But the beat really knocks, the flow is good, and he manages to shout out his homies all at the same time.
Black Spade" "As We"


"Tale of 32" is another favorite simply for the knocking beat and nice flow that Spade has on this track. There's really not much more to add to it than that.
Black Spade: "Tale of 32"

I could keep going on and on about how worthwhile this album is and how it really would be a nice addition to your collection. Trust. But part of the fun of getting new music is allowing yourself to discover the gems on your own. Thankfully, this album has several for the choosing.
Black Spade discusses more about the album, including collaborators, how long he's been in the game, and his favorite tracks below.
Black Spade: To Serve With Love [Amazon]/[iTunes]