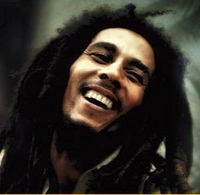 Not so shortly after it was announced that a movie based upon Rita Marley's biography, No Woman No Cry: My Life With Bob Marley, would be brought to movie screens next year, comes more news. Firstly, there is also Martin Scorcese documentary chronicling the reggae singer's life scheduled to be released in 2010. Secondly, the Marley family including Rita, will not be allowing the biopic producers access to any of the songs in Bob's catalogue. As Rita told the Hollywood Reporter, "When I sold the film rights to my book, the contract did not include any rights to use
my husband's music."
Say what?
Unless the craziness that Lauryn Hill-Marley has been infected with is contagious, Rita Marley is dead serious. And the Marley family are behind the Martin Scorcese documentary. To hear executive producer Ziggy Marley tell it,

"All our efforts and support are currently directed toward the documentary. We believe
that this project is the best way to represent our father's life from his
perspective, and any other film project pertaining to our father will be empty
without his music to support it."

Speculation is rampant that Rita is denying the movie rights to the Weinstein Company in order to up the bid for her husband's music being used for the biopic. For right now, this movie is without any of Bob Marley's music and, therefore, incapable of being brought to the big screen. And right about now, all this is sounding particularly good in Rita's favor that she will be hit off more for her husband's music. Sure, it sounds shady, but it's only business, never personal.