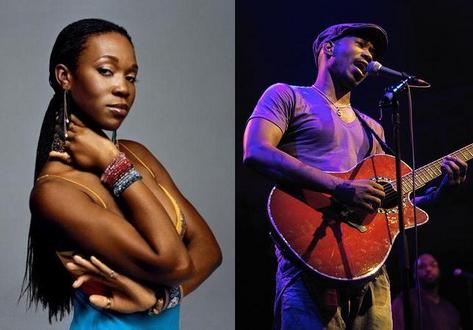 How excited are we at this news that India.Arie has secured a label deal with Universal Republic Records for her own imprint? VERY EXCITED! SoulBird Records is India's foray into label land and according to Arie, it will feature "music with intelligence and heart, music that moves people
in their souls and their bodies." With that kind of manifesto, prepare to see and hear a lot about SoulBird on SoulBounce.

The first artist on the label is her friend and frequent collaborator, Anthony David, whose album Acey Deucey will drop on June 17. The album will be an amalgamation of tracks from his two existing albums, 2004's Three Chords and the Truth and 2006's Red Clay Chronicles. The lead single "Words," a duet from India and Anthony, hits radio in April.

I first heard that Anthony had signed with a major label back in February, and I gave the idea an ever-so-slight side-eye because he's been doing it lovely on the independent scene for a few years now. But hearing that he's down with his homegirl India puts my soul at ease that this project will be handled properly. There's no word yet on what songs from Anthony's current releases will appear on Acey Deucey, but hopefully one of my favorite jams of his, "Smoke One," will make the cut.


TAGS:  anthony david, audio, india.arie
Previous: Year-Long Celebration Honors the Women In Hip-Hop Next: Tortured Soul Can’t Wait To Get ‘Home To You’