The Roots Redeem Themselves With ‘Rising Up’ 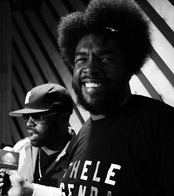 After the furor that ensued after the release of the "Birthday Girl" video and its tale of statutory rape, I attempted to try to make sense of it all. With my renewed faith in The Roots, they have redeemed themselves and brought the ruckus like only they can with their recently released track "Rising Up." Featuring a go-go-ish beat provided by Questlove, the editors over at SoulBounce HQ have described it as "crazee!" and remarked that "DC is going to go bananas for this!" Everyone's on their "A" game for this song: Black Thought and Wale flow well and Chrisette Michele sings the hook like only she knows how. We're not sure if this will be the official first single, but it should be. For all of you concerned about "Birthday Girl" being the first single from Rising Down, never fear: Okayplayer confirmed on SoulBounce first that this song would only be on the international release as well as the iTunes exclusive for download. You heard it here first!

The Roots feat. Wale and Chrisette Michele: "Rising Up"