What Is Really Going On With Dude From The Jungle Brothers? 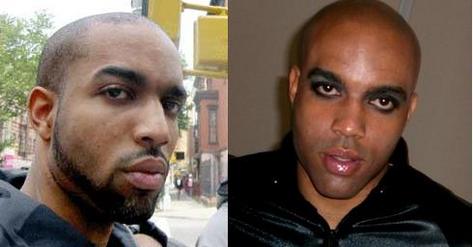 I've been debating whether or not I was gonna touch this story that had the internets goin' nuts on Monday, but I can't help myself. I'm sure by now you've seen or heard about the scandal that MediaTakeOut "broke" about Afrika Baby B.A.M., formerly of the Jungle Brothers, when they posted some photos of him in full makeup and dressed in what looked to be a gimp outfit. While this wasn't exactly Entertainment Tonight material, for any lover of the Native Tongues posse and early '90s hip hop, seeing these suspect flicks probably took you through some changes.

If you were anything like me then you were more than likely in denial. Could Afrika be doin' his own dang to the beat of a different drum? Was he now a member of A Tribe Called Questionable? And how in the heck did he get his lip gloss to be so poppin'? Surely there was an explanation to all this madness I was seeing.

From what I've gathered, he is not gay. Sorry, fellas. But he is Pagan. And I guess Pagans are into the smoky eye. For those uninformed, a "pagan" is defined by Webster's as "one who has little or no religion and who delights in sensual pleasures and material goods : an irreligious or hedonistic person." Mmkay. A quick trip to Wiki gives more info on Paganism and breaks it down even further.

This whole Pagan thing was quite evident on a visit to his MySpace page. Those damning photos were on display in a public photo album with captions such as "The Pagan Narcissist" and "The Pagan Prince" and giving props to his photog/makeup artist. He also mentioned the "Pagan Society," and they just so happened to be his top friend. So I clicked away and went to that page to get to the bottom of this. If there was ever a time I wished I could unclick, this was it.

On the bizarre Pagan Society MySpace page
Baby B.A.M. can be heard railing against hip hop in the "Pagan Mantra," which can also be read in its entirety in the About section of the profile. If you can stand listening to his madman rantings over the hard rock track, then go for it. I personally couldn't stay on the page for any length of time and felt the need to break out my bible and sleep with a cross after visiting last night. Trust and believe I will be in church on Sunday.

As for B.A.M., he is on some different stuff right now. Gone are the days of trying to house anybody or be their buddy. Miss Crabtree won't be pleased.


TAGS:  afrika, baby b.a.m., jungle brothers
Previous: ‘Are You’ Ready For HEAVy? Next: Morning Soul: Do It To It 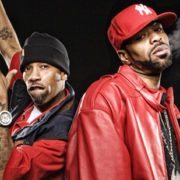 Morning Soul: Do What You Want But Move Every Muscle

Morning Soul: You In My Hut Now 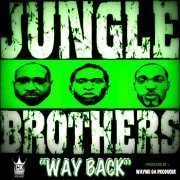