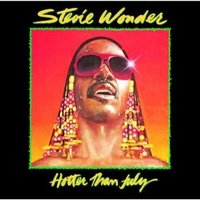 Stevie
Wonder
, it seems, has always had a penchant for describing worlds that neither
he nor any of us, ever truly have the opportunity to witness. His Journey Into The Secret Life of Plants
personified the life of flora in a way that had not been done since classical
composers had attempted to centuries before, while his journey into outer space
on a rocket "half a mile from heaven" was a bittersweet tale of rejection.
"Rocket Love" was a little gem tucked into the album that made political
messages ("Happy Birthday" honoring Dr. Martin Luther King and "Master Blaster
(Jammin')" honoring Bob Marley) sound bouncy and fun. The melancholy within
"Rocket Love" is ever so palpable from the first line "I longed for you since I
was born." A remake by Madlib as his alter ego(s) Yesterday's New Quintet was one of the best
interpretations of this track since its creation. Hopefully, Stevie found it
worth his while since being given a star and dropped back into this cold, cold
world with the rest of us who have adored him before and since.