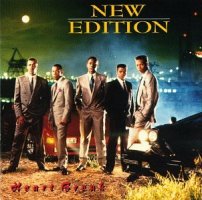 The year was 1987. Due to pressure from the record label, Bobby Brown had just been voted out of the group. Ralph Tresvant started mumbling about following Brown out the door and going solo. The group we all knew and loved as New Edition was in danger of disbanding.

Thankfully, that didn't happen, as the remaining members of the crew (Ricky Bell, Michael Bivins and Ronnie DeVoe) had the foresight to recruit Johnny Gill to sing lead, thus heading off Ralph's exit. So, either way there was going to be a new New Edition. And when Ralph came to his senses and stayed put, what the public got was a more mature sound with the release of the group's fifth studio CD, 1988's Heart Break.

They went from Word Up! to grown up, right before our eyes. Guiding the resurgence were super-producers Jimmy Jam and Terry Lewis, the architects of Janet Jackson's multiplatinum 1986 Control album.

And this song, "If It Isn't Love", was the re-introduction--a departure from the bubble gum sound of their earlier work to the more sophisticated stylings that would take them to the next level. The definitive drumroll intro alone should've clued us in that everything was different now.

From boys to men, indeed.