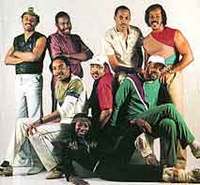 The S.O.S. Band will not only go down as one of the few bands in history to be able to bring a family reunion gathering to its feet, but for producing some of the most beloved R&B songs from the 1980's. Interestingly, the S.O.S. does not stand for the distress signal, but for Sounds of Success. Led by Mary Davis, this Atlanta-based band had their first #1 single "Take Your Time (Do It Right)," three years after their formation. Their string of hits include "Just be Good To Me," "Tell me (If You Still Care)," "The Finest," and other "Soul Train Line"-inducing jams. After bearing witness to one of their amazing stage shows, they were as tight as Prince's Revolution back in the day, and played like it was 1984. As anyone who has seen them perform live can attest, they still jam harder than most bands half their age. If the S.O.S. Band initially set out to make sounds of success, then they have...many times over.
The S.O.S. Band: "Take Your Time (Do It Right)"