Seems Cee-Lo Has the ‘Write’ Touch These Days 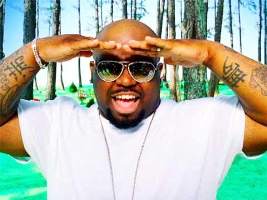 In the face of mixed reviews of the latest Gnarls Barkley project, the mightly Cee-Lo is still apparently riding high these days, recently penning tracks for both Jennifer Hudson and Solange Knowles.

The track written for Hudson, "All Dressed Up In Love," will appear on the soundtrack for the highly-anticipated Sex in the City movie, while his contributions to Solange's sophomore release, SoL-AngeL and the Hadley Street Dreams, are the songs "T.O.N.Y." and "Sandcastle Disco."

Knowles said she "literally had to beg Cee-Lo to listen to my music" before he agreed to come aboard. And while there's no word on whether he'll appear on any of the tracks, I'm sure we'll all agree that his presence on any of them would likely take them up a notch.  Stay tuned.


TAGS:  CeeLo Green, jennifer hudson, solange
Previous: No Kidding: Ray’s Family Feels ‘Disrespected’ by Manager Next: Slim Is ‘So Fly’ On His Own