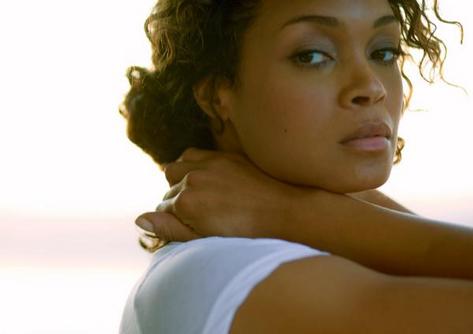 Now that summer has unofficially arrived, my self-imposed "Harlem hibernation" has ended. Which means that I'll be out and about, scouring the tri-state area for the most SoulBounce-worthy talent the city has to offer. This past Friday, I was invited to check out Eusonia recording artist Maiysha--an artist Newsweek has described as a soulful songstress who's vibe "is just as comfortable on the dance floor as it is at a backyard barbecue"--as she performed selected songs from her upcoming release, This Much is True. Backed by a live band, the Brooklyn resident and Ford Plus model let loose with soaring vocals that literally rocked the packed studio with a mix of rock, soul, jazz and funk. Growing up in Chicago and Minneapolis helped Maiysha, who describes her family as a version of television's Huxtables, mine material for the 12 original compositions on True. Eusonia founder and album co-writer/producer Scott Jacoby describes the sound he helped craft as "progressive soul." I call it worth a listen. The CD drops in August. For now, check the track below as Maiysha takes you into "Orbit" and tell us what you think.