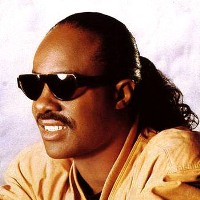 How do you say 'happy birthday' to a man who actually wrote a "Happy Birthday" song? How do you put into words the impact he's had on R&B and soul music history? How do you pay all due respect to a global icon who's amassed more than thirty top ten hits, won a record twenty-five Grammy awards, an Academy award for Best Song and has been inducted into both the Rock & Roll and Songwriters halls of fame?

In fact, how do you thank the man who gave us "Isn't She Lovely" and "My Cherie Amour"? The man who took us to "Higher Ground," who had a "Part Time Lover" and dared anyone to question him about it? How do you do better than "Do I Do," "You Are the Sunshine of My Life," "Living for the City" and "I Was Made to Love Her"? How do you even begin to acknowledge the motion picture soundtracks to which he's contributed, the television shows on which he's appeared, the duets he's been a part of, the tribute songs he's inspired? How do you shout out his patented head sway, the beads, the hairline, the way he made the harmonica cool, his mastery of the keyboard, clavinet, et al?

If you're SoulBounce, you pay the ultimate respect by including his songs on our Top 100 countdown. And today, right now, we do it through words: Happy 58th Birthday, Steveland Hardaway Morris, aka Stevie Wonder!


TAGS:  birthday, stevie wonder
Previous: Bounce-Worthy: Tawiah Next: Rumored Producers for Whitney’s Comeback Proves Singers Over 40 Don’t Get Out Much