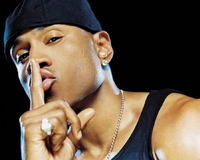 Mr. Ladies Love, LL Cool J, is releasing his last album on the post-Jay-Z Def Jam. Titled Exit 13, the album will be the last Def Jam release for Uncle L. The single "I Cry" featuring Lil' Mo has already been leaked to the web, and we can't say that it's his best work (although far from his worst). After releasing 12 albums on Def Jam, LL publicly expressed his displeasure with Hova's management skills at the storied label. We at SoulBounce would be mad too if our last album (Todd Smith) sold only 335,000 copies due to no/bad promotion. We wonder what label LL will sign to next? He has been associated with the queen of bitch fits beef 50 Cent. Exit 13 will be released on July 18. [BB]