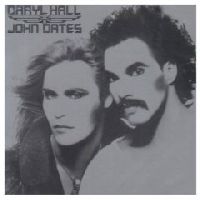 Today's countdown entry is "Sara Smile", the single that put Philly blue-eyed soulsters Daryl Hall and John Oates, better known as Hall & Oates, on the rhythm and blues radar. Their first album with RCA, after a less than successful stint with Atlantic, was appropriately titled Daryl Hall & John Oates, and spawned "Sara", an ode to Hall's then-girlfriend Sara Allen. What drew the most buzz on the streets, however, was the album cover itself (see photo to the right), which showed the duo in heavy makeup -- to the point of distraction. Years later, when the album cover came up during an interview with VH1, Hall proudly boasted that, while in the makeup, he looked like "the girl he always wanted to go out with." Insane. The track peaked at number four on the Billboard Hot 100. Some prefer the song's remakes, done quite well by both After 7 and Boyz II Men. While their versions were more than effective, neither strayed too far from the original's flavor, thus serving more as tributes than much else. This serves as our tribute to the multiplatinum, hall of fame artists. Take a listen and I guarantee that you won't need air conditioning, as cool as this woo-ing is. Word to Sara.

TAGS:  after 7, boyz II men, daryl hall, john oates
Previous: With Raphael Saadiq & Stevie Wonder On This Track, We ‘Like It’ Too Next: Technical Difficulties!!!