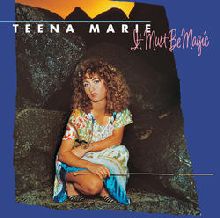 Let's just get this out of the way off the top: Contrary to popular belief, Teena Marie was not the first female to rap on a record. In fact, she wasn't even the first white female to do so. Nope, both distinctions belong to Blondie frontwoman Debbie Harry, whose raps on 1981's "Rapture" beat Teena to record store shelves by a few months. And while Teena's sixteen bars (which included shout-outs to Shakespeare and Nikki Giovanni, "just to name a few"--bananas!) on 1981's "Square Biz" were far superior to anything I've heard on Miss Rap Supreme, it was actually Harry's rap that inspired Teena's funky flow. And funky is the perfect word to describe both the song and Teena herself, who stayed in a perpetual funk even at the peak of her success, never really satisfied creatively. She always wanted to do more, to try something new. Something different. She forced herself to--pardon the pun--think outside of the box. And with this track (the title of which was inspired by bass player Allen McGrier, whose favorite phrase was "square business"), a classic was born.

The song was featured on the gold-selling Motown release It Must Be Magic, and was something straight out of mentor Rick James' playbook--a track that demanded that you proceed directly to the dance floor and shake that azz--whether it was round, square or whatever. Clearly, Teena learned well from James, with "Biz" peaking at #12 on the Billboard Club Play charts, and climbing all the way to #3 on Billboard's Black Singles list. Sure, we could've charted it higher ourselves, but that doesn't really matter. What matters, above all else, is that "Square" is here and is one of those classic R&B songs that will always be around. Now, in the words of Ms. Marie: "Everybody get up!"