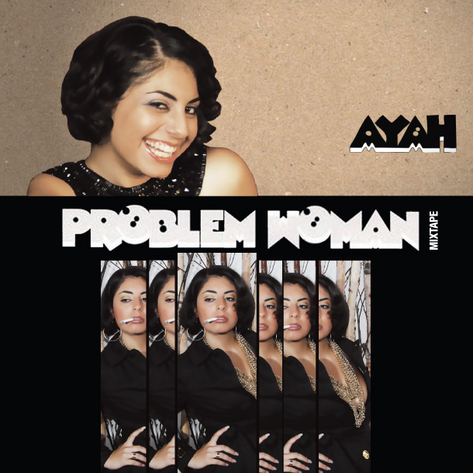 Are you looking for a place to find some soul music that combines dope beats, tight vocals and meaningful lyrics? Then look no further than our neighbors to the North because Canada is home to some hot and hungry talent looking to change the game. One such artist that has had me nodding my head to her music for a minute is Toronto songstress, Ayah. In the unfortunate event that you aren't hip to her brand of Hip Hop Soul, then get your hands on her mixtape, Problem Woman, for a proper introduction. Problem Woman has been in heavy rotation on my iTunes since it surfaced online on June 1st. Just like her mixtape cover that shows the two faces of Ayah, her music is sweet but street. The Marvin Gaye-inspired mixtape combines 22-year-old Ayah's honey-thick voice over classic hip-hop tracks, such as Pharcyde's "Passing Me By" and Tribe's "Find A Way." Later on Problem Woman she gives us a taste of what's to come on her upcoming debut CD with a few snippets and full-length tracks of original material that prove that she ain't no joke.

Problem Woman is available for free download on Ayah's website. For those who'd like to hold a piece of Ayah in their hands, autographed copies of the disc are for sale on her MySpace page. Now enjoy these cuts that I've been bumping to the most.


TAGS:  audio, ayah
Previous: LL Cool J & The Dream Make a ‘Baby’ Next: Chrisette Michele Tries Something New In ‘Love is You’