Whoever is up to cranking out the '80s tributes to all the pop culture fun we enjoyed as youths, keep it coming. In a mere week, we were astounded and amazed by the '80s covers from Zo! and Tigallo Love The 80's and now this video. "Barack Da Vote" starts out by paying homage to one of my favorite (corny) breakdancing movies, Breakin', and from there it turns into a hodgepodge of Shelia E., Apollonia, and The Revolution references. Is it hilarious? Yes. Will it make you want to "Barack the vote?" Possibly. Just know that Condoleeza Rice gets raw on the dancefloor, but B-Rock a/k/a Barack Obama kills it at the end. And as for Hillary Clinton, she displays some Democratic Party unity in a way she hasn't really done in reality. Get your cardboard boxes out because it's about to be a breakdance battle of epic proportions set to "Looking For The Perfect Beat" once you press play below. 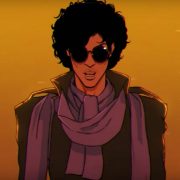