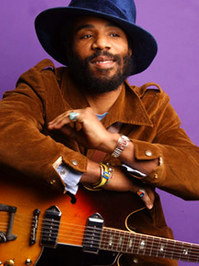 So maybe you've noticed by now that we Barack our bodies at SoulBounce HQ. It's not our fault that artists keep coming out with odes to the current Democratic Presidential candidate. Even Atlanta's own Cody ChestnuTT, who seemingly slipped into darkness after The Roots chose to cover his original song, "The Seed," from his The Headphone Masterpiece album, has gotten in on the Obama support wagon. ChestnuTT's "AfrObama" features his characteristic gritty-sounding guitar chords, his honey-thickened voice, and what sound like children chanting "Obama" in the background, is one of the more earnest pro-Obama songs that have been released. And it gets me in the mood for some jolof rice! Verdict: it's a win-win situation all around. Good lookin' to Okayplayer for putting us on to this one.