Dru Hill Attempts to Get ‘Loose’ With New Single 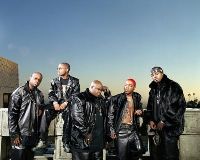 OK, so maybe I've been working too many long hours lately. That must be it, because when I received the new Dru Hill single in my inbox last night, I was prepared for my nerves to be further frazzled by it. Especially when I saw the title of the song was "Loose," from an upcoming album called *sigh* InDRUpendence Day. Then I snickered, recalling how Woody shook himself "loose" from the group during their reunion interview on air, and the open auditions for his replacement being "loosely" competitive, while they had some dude called "TayTay" (nOva, 2008) on the back burner all along.

So then the single began to play, and it's a slow jam (please don't let it be confused with a ballad) that, within the first few seconds, made my side-eye wanna run "loose." Let's run it down, shall we? Talking during the intro? Check. Product placement within the first five words of the lyrics? Check. Sisqo singing lead vocals and apologizing to yet another young lady for verbally assaulting her with horrible pick-up lines as she talks on her phone while walking down the street? Check. There's so much about this song that belongs on an "We're Not in the '90s Anymore" episode on VH1. But again, I've been working too many long hours lately. Maybe the song is a winner and my good judgment is what's been shaken "loose." Give it a listen and let us know. I'm going to take a nap.