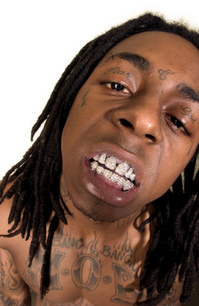 Welcome to the fifth installment of "Man vs. Machine" in which I, SoulBounce HNIC, listen to one hour of mainstream urban radio and document my "findings" along with the type of commentary that only your friendly SB editors can provide. Perhaps by the end of this experiment, I will have:

Last Friday, I decided to take it back to "Prime Ham Time," by popular demand. I went with Our Other Local Station, which I haven't listened to in months. Would you believe they disappointed me so much I wanted to cry in a corner like I did when I walked in on Mommy and Daddy as a child? It was that traumatizing, people. Oh, and I'll never forget that you like it when I put myself through this. That's such a good feeling!

(6/20/08) 6:30 They're getting Lil' Wayne out of the way early. He always sounds like he's straining out that last stubborn pebble and that's why I do not like him. This is the "Mr. Carter" joint with JiggerMan. It took them, what, fifteen years to do this sh*t? Did they just realize they share a name? This bus is not only late, it's short as well.

6:32 DJ Quicksilver just went into Juvenile's "Slow Motion." I seriously wanted to beat the snot out of this song when it was popular, but I'm surprisingly happy to hear it right now. Because current hits suck harder than this. You know how when you suck on Mike & Ikes so hard your tastebuds go away and take an entire 24 hours to grow back? That's how badly most popular music sucks right now. Stop making excuses for it, people! It's trash!

6:34 LL Cool J & Alicia Keys "Teenage Love Affair" remix. They are trying to endear themselves to SoulBounce, people! On this, LL invokes "I Need Love," because he's smart enough not to draw from his recent material. But this remix is cute, can we get some First Spin action on this joint? Very summery.

6:38 The annoying 6-10 team is running their mouths, talking about $2.99 buffalo nuggets at Popeyes. This might be the only useful thing I hear this hour. Oh, and Nas is performing in DC! He'll rethink this whole "nigger" thing when he hears how much we use that word in DC. I'm only sayin'....

6:40 Uh oh, the Snoop and Too Short joint! "Life of the Party." You KNOW this song bumps! Can you believe they performed this on One Life to Live? Yes, TOO SHORT! And Jackie Collins likes this song. Something's afoot, children!

6:44 Okay this genius decided to play "Lean Back." Quicksilver, I question you. This song no longer cranks. When will y'all let this song die, people?

6:46 Oh snap! He just went into the Lil' Jon remix with Mase and Eminem! All is forgiven. Full disclosure: I miss Eminem. His last album, however, was the musical equivalent of liquid sh*t on a ferris wheel.

6:49 Please tell me this isn't a 50 Cent/G-Unit song. Who among you is the cancerous, defiant jerk still buying their records? Because let me tell you something, if you stop buying they'll stop recording them, in theory. This crew is more useless than Menudo after Ricky Martin left (or was forced out after his cajones dropped). For the record, the name of the track is "I Like the Way She Do It." I've been avoiding this song for months, but thanks to this column I was just forced to listen to it. Thanks so much, Law Diva! But don't let me catch you in the street.

6:53 They just went to commercials. Hopefully these will last for about 40 minutes.

7:02 Great, they're about to do a countdown. I'll be done with this column before I find out what number one is, and that's good because I don't care what people are making popular by calling in. Because anyone that calls into this station to do anything other than cuss them out and tell them to die needs their phone cut off.

7:04 Number seven is F*****G "GET SILLY" WITH SOULJA BOY!!!!111!!1!!!! Do you people see what you've just subjected me to? I hate everyone that's laughing at me right now. When I go to Hell (and I'm almost certainly sure I will) this is what DJ Mephistopheles will be playing on repeat. I feel like I'm being kicked in the back of the head by a bunch of seven-year-olds. Can you imagine getting jumped by a bunch of seven-year-olds? That sounds real painful and embarrassing doesn't it? Shesus Christ this song is awful in that way!

7:08 Number six is "Bust It Baby." My side-eye just flew across the room and splattered against the wall! It's like these people go into the studio and say "How can we make nOva want to kick his own ass? I want a track that makes that happen." And I'm seriously about to cut the cord on Ne-Yo and Janet for that remix. How dare you validate PLIES of all people?

7:12 Number five is "A Milli." Of course. Is that The Dream or T-Pain? And Jay-Z? Let's just put everyone on this damn song. Where's Beyonce? Carrie Underwood? Condoleeza Rice? It's coming, ya'll. Hell, why not just play the entire Carter III this evening, Our Other Local Station? You know you want to.

7:16 Snoop's "Life of the Party" again. Less than an hour has gone by, people. They knew this sh*t was number four when Quicksliver was spinning earlier and they let him play it anyway. Classy! Also, hearing it again this soon makes me hate it, but that's probably because I'm still tart about "Get Silly" and "Bust it Baby." I'm just a living, breathing pile of hate and rage right now. I swear to God if ya'll don't start clicking on these ads, I'm finding each and every one of you and screaming in your face. Loudly.

7:20 They're giving away Ray-J and Bow Wow tickets. These people are just trifling. Only ten more minutes to go. Hopefully I'll make it without chewing off my own face in protest.

7:23 Commercials. They're also giving away tickets to "view" the BET Awards at some bar in Maryland. Have they no shame? Oh, and just in case you think I'm making all this up because of how reprehensible it sounds, think again! My mind is not this diseased. Damn you, Urban Radio!

7:30 ...and they're still playing commercials. I've never been so happy to hit a "power" button in my long, Black life. Good riddance to this mess. I was so traumatized by what I heard that I decided to write them the following letter:

Dear Our Other Local Station,

You have effectively rendered your target audience braindead.

You know you love me.