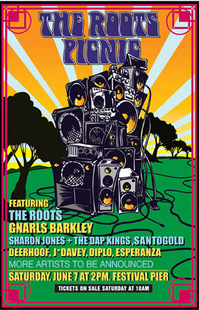 I, Vivrant Thang, have been brought on board to keep you in the know about events going on from coast to coast. The calendar is already overflowing with concerts, in-store signings, and film screenings that will likely be of interest to the SoulBounce audience. Every couple of weeks I'll be highlighting a few you should not miss.

Saturday, I'll be roadtripping up to Philly for The Roots Picnic at the Festival Pier. The eclectic lineup includes Gnarls Barkley, Santogold, J*Davey, Sharon Jones & The Dap Kings, and The Cool Kids. Tickets are still available at Live Nation.

New York stand up! The Paid Dues Independent Hip Hop Festival jumps off on Wednesday at the Nokia Theatre in Times Square. Among those scheduled to rock the mic are Rakim, GZA, Murs, 9th Wonder, and Blackalicious. Tickets are still available and dates are scheduled in other cities where artists like Little Brother and De La Soul are a part of the lineup.

Wednesday and Thursday in New York: Lalah Hathaway will be celebrating
the release of her latest album Self Portrait with a performance at
B.B. Kings
. Tickets are 39.50 in advance and $42.00 at the door.

Thursday in DC: J*DaVeY will perform at Bohemian Caverns. Tickets are $15 and can be purchased here.

Thursday in Baltimore: This Bilal stan will be a little further north watching
him and Wayna perform at Jazzy Summer Nights at Hopkins Plaza. And it's
free!

, and Howard Hewett. Tickets are still available through Ticketmaster.

Have an
event you think fellow Bouncers would enjoy? Send it to
calendar@soulbounce.com. Be sure to include relevant links or a written
version of the details!