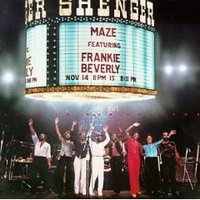 For those who think that "Lift Ev'ry Voice and Sing" is the Black National Anthem, I hate to break it to you but you've been hoodwinked and bamboozled. As quiet is kept, there's another song that really holds that distinction: "Before I Let Go" by Maze featuring Frankie Beverly. No diss to James Weldon Johnson, but Frankie and the fellas are an undeniable part of the Black experience in America. From Alabama to Alaska, when the needle hits the record on this jam, the party has officially started. "Before I Let Go" is a song that will move the crowd whether it's comprised of old heads or new jacks. This is one of a handful of soulful party songs that has cross-generational appeal with its infectious groove and easy-to-sing lyrics. Released on their 1980 Live in New Orleans recording, "Before I Let Go" is solid gold, despite only rising to lucky #13 on the R&B charts. The soul outfit led by Philadelphia's Frankie Beverly was commonly known for their string of slower to mid-tempo tunes from the mid-'70s through the 1980s. However, this is arguably Maze's most endearing song and definitely their most upbeat release. A favorite not only at clubs, parties and other social gatherings, this song is guaranteed to still bring down the house when Maze, often called the "Black Grateful Dead" due to their loyal fanbase, performs it live. And let me tell you, you have not lived until you've been to a Maze featuring Frankie Beverly concert. Having recently seen them live for the first time, I am officially a believer.

Now let's all sing along and shake a tail feather to this classic.

TAGS:  audio, frankie beverly, maze
Previous: Jazmine Sullivan Will ‘Bust Your Windows’ If You Do Her Wrong Next: Morning Soul: Too Dangerous For Me