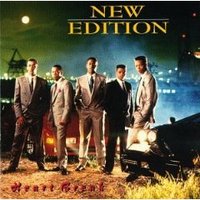 Okay, okay, okay. So, what do you do when an '80s boy band with crossover appeal loses one of its members amidst rumors involving drug use, said member reemerges a few years later to become a bigger star than anyone ever anticipated, and your last record, Under The Blue Moon, an attempt to cash in on the '50s fever that took hold during the '80s, was absolutely wack? Well, you do what New Edition's founding members did minus Bobby Brown, of course, and break the glass in case of an emergency. In this case, the saving grace came in the form of a little-known singer named Johnny Gill, whose husky growl of a voice had joined Stacy Lattisaw on a modest hit entitled "Perfect Combination" a few years earlier. Not only did Johnny Gill breathe new life into post-pubescent New Edition, but it was the grown-ness of his voice that helped NE's core fans relate to them more since many of us were no longer innocent little "candy girls." While Heartbreak featured many R&B mainstays ("If It Isn't Love," "You're Not My Kind Of Girl"), the seminal hit from this album remains "Can You Stand The Rain." Penned by hitmakers Jimmy Jam and Terry Lewis, it features both Ralph Tresvant (pre-"Sensitivity" and post-braces) and Johnny Gill (in the midst of a S-Curl/fade situation gone wrong) and Ricky Bell doing his required best with his solo during the bridge (remember how he killed it on "Is This The End"!!!). In any case, while many kudos can be given to Johnny, let's not forget the talent contained within this often under-accoladed group that later gave rise to BBD, and successful solo careers for both Ralph and Johnny. If the question is still poised whether we can stand the rain or not, the answer undoubtedly is yes, several times over.

New Edition: "Can You Stand The Rain"
P.S. For all you '80s babies out there, and for those of you who know (or don't) that New Edition's throws down live, their performance of this song on The Arsenio Hall Show is after the bounce. You're welcome.