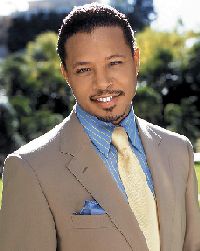 For all intents and purposes, the first time Terrence Howard made an impact on our consciousness was as the straight-forward, no-apologies troublemaker Quentin in 1999's The Best Man. In that role, he was also a bad mother (hush yo' mouf). What? I was just gonna say plucker, as in he wowed us with his guitar playing skills. And although he seemed to be playing a supporting role in damn near every movie released from that point forward, his next pivotal role was as the struggling D-Jay, a plucky pimp-turned-rapper in 2005's Hustle and Flow. So, it's safe to say that Terrence likes to dabble in music, yes?  That's all well and good, but just because you like something doesn't necessarily mean you should practice it. Hell, I like medicine, but I think it'd be wise to keep me away from all scalpels and stethoscopes.

Nevertheless, all the talk about an upcoming T-How Bad album is true. It's "urban country," he says, a combination of Spanish guitar and R&B, and is due out in September. The first single to surface on the web is "Love Makes You Beautiful." I'll say it: I'm underwhelmed but still trying to keep an open mind to it. Especially since he's following his dream, making it happen. And in the meantime, subjecting us to it. Take a listen for yourself. And then tell us if you think it's beautiful music, or if it's hard out there for your eardrums. Also, because this track has been out for a while, and to show a wider range of his "portfolio," we're doing another Twin Spin, hipping you to another leaked track called "Sanctuary."  Enjoy.