The Floacist Wants You To ‘Work It, Baby’ 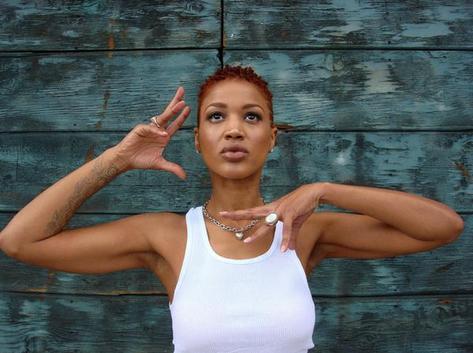 With a Floetry reunion having about as much chance of happening as Hillary Clinton being elected the next President, it's safe to say that Marsha Ambrosius and Natalie Stewart have moved on. The Songstress has stayed busy by adding her vocals to tracks by various artists, putting out a tragic mixtape and working on her new album, from which we've heard a few potential leaks. On the other hand, we haven't heard as much from the Floacist as we have her former partner in rhyme, but that doesn't mean that she hasn't been on her grind. Quite the contrary, she is readying a solo project, which according to her MySpace page will be named The Offering...xx and is labeled the "Pre Album, Album." Alrighty then, that's different. And so is her sound this time round. Don't go into it expecting to hear an album full of those baby-making grooves and the neo-soul aesthetic that Floetry was famous for. That presence is still there, but the majority of the cuts lean toward Brithop with Natalie spitting over hard-hitting beats. An example of this can be heard on the cut "Work It, Baby," a loud declaration to stand tall and be proud. Admittedly, I wasn't feeling this at first, but the more I've listened, the more it's grown on me thanks to the lyrical content. I don't love it, but I don't hate it either.

So what do we think about this one, folks? Is it dope or does it make you say "nope"? Have at it in the comments.

The Floacist: "Work It, Baby"


TAGS:  audio, floetry, marsha ambrosius, natalie stewart, the floacist, the songstress
Previous: Hiram Bullock (1955-2008) Next: Looks Like Janelle Has A Reason To ‘Smile’