What Do You Get When You Mix an Icon with an Akon? 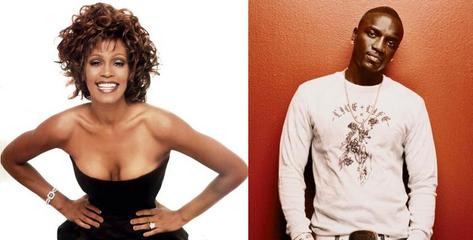 After Mariah validated T-Pain and Janet validated Plies, we now have Whitney Houston inserting herself back into the game with none other than Akon via "Like I Never Left." This is as creatively-insipid as it is commercially-strategic. Some would argue that despite Akon's nasal ubiquity, he's a talented fellow. Point taken. But the thing that really pisses off people like myself, is that when you look at the landscape of R&B/Pop music and decide above all others to team Whitney with Akon, all you're doing is marginalizing more qualified male vocalists that don't sound like they have a sinus infection. We've had this conversation before. Was Thicke not available?

But imagine for a moment that Akon isn't on the song and what do you have? Elevator music, and said elevator is going straight to Hell. Adding Akon makes it a conversation piece, but not exactly worth a damn. Naturally, I was bored and disgusted all at once listening to it. If this ends up on her new album that Clive Davis has been promising us since Happy Days was still on the air, I'll be first in line to buy something else.

Nippy feat. Not Exactly Wyclef: "Like I Never Left"