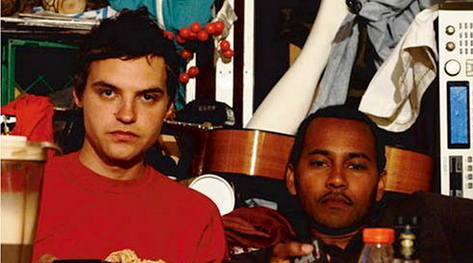 There have been times in my life, more often than not, when all I want to do is have some private time with myself. Times when all I want to do is imagine myself floating on a cloud of love. Sure, listening to old classics usually fulfills this need, but sometimes you crave something that you haven't heard before. Something that is familiar, yet completely new to your ears all at the same time. That's where Owusu and Hannibal come in.

Hailing from Copenhagen, Owusu and Hannibal have between them American, Ghanian and Danish ancestry. This interesting mix, coupled with their interesting take on what they call soul music, makes for a refreshing sound that falls somewhere between Platinum Pied Pipers, The System and Spacek with a bit of Slum Village thrown in. Their debut Living With... was released overseas two years ago. Luckily, this album was recently released in the US this past June. The question of whether or not you should cop it is about as obvious as asking whether you should bathe on a daily basis. It's a different take on what ever-evolving soul music is and becomes more overwhelming each time you listen to it.
Owusu and Hannibal: "Le Fox"