Brandy & Monica Drop New Singles, but Are They Enough? 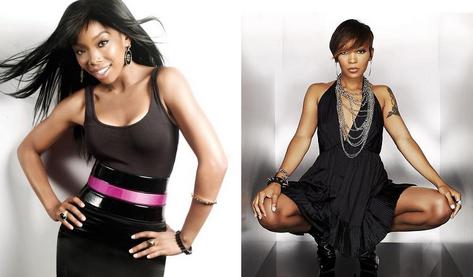 Remember back in the day when it was all about Brandy versus Monica, and Aaliyah won? Well, with Babygirl sadly out of the picture, nowadays B-Rocka and Miss Thang are left to duke it out in the imaginary slapboxing match in my head, but neither has seemingly had much fight in her lately. However, now both twenty-something singers are returning with new albums in separate attempts to regain the championship belt.

If this were 1998 and I heard that Brandy and Monica had new albums on the horizon, I would've been waiting like a fiend for them to drop. But in '08, not so much. The last releases from both artists--Monica's 2006 release The Makings of Me and Brandy's Afrodisiac in 2004--left a bad taste in my ear. I suppose every artist is allowed one bad album in their career (anything more that and they get the gas face), but both of them were better than that weak material. And unlike some R&B broads who couldn't sing a lick and took over on the charts during their absence, Brandy and Monica have talent for days, which made their fall off even worse.

With their official first singles now released, both artists are trying to turn their setbacks into comebacks. Brandy's "Right Here (Departed)" and Monica's "Still Standing" feature both vocalists in top form with their respective signature vocals but still sounding current. I happen to like both songs, but it remains to be seen if Brandy and Monica can regain their positions on the charts and in heavy rotation on everyone's iPod and not just mine. This is some of the best material I've heard come from either singer's respective corners in a long while. I'm glad to see that in their fight to get back on top, Brandy and Monica are coming out swinging.