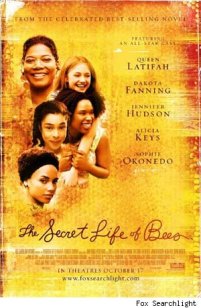 The trailer for the film The Secret Life of Bees surfaced recently, and after much (wait for it...) "buzz"--which has included major props at various film festivals--director Gina Prince-Bythewood is ready to unveil her adaptation of the Sue Monk Kidd bestselling novel. Set in South Carolina in the 1960s, the film stars Dakota Fanning as Lily Owens, a 14-year-old who runs away from home with her caregiver Rosaleen (Jennifer Hudson) in search of her mother's hometown. Their journey leads them to the Boatwright farm, home of beekeeping sisters May, June and August Boatwright (played by Sophie Okonedo, Alicia Keys and Queen Latifah, respectively). The film also stars Tristan Wilds ("Michael," The Wire) as the object of Lily's affection, and Nate Parker in yet another period piece, fresh from his great work in The Great Debaters. I don't know about anybody else, but I'll definitely be checking this out, if only to see if Alicia can hold her own with the Queen, and if Jenny can further "de-Effie" herself. Do you plan on checking it out? Peep the trailer below and let us know.