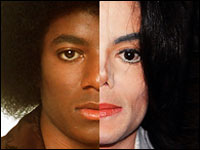 "What does Michael Jackson make you think of?" AOL's PopEater polls it's readers, "His music, his plastic surgery, the scandals, or other?" Well, it appears they aren't really giving them a fair choice, as they have a photo gallery chronicling his "50 Faces in 50 Years." Good heavens! Not that I'm a stan for MJ (I reserve that behavior for Janet, who's about one can of Jesus Juice away from being just as loco), but could his plastic surgery be an easier mark? The topic isn't so unavoidable that there can't be discussions about everything else. Maybe I'm being a little too generous and self-righteous today. To their credit, they didn't say he looked like the ghost of Joan Crawford, which is admirable. However, it would be nice if, on the man's birthday, everyone could say something positive about Michael Jackson. Then tomorrow we can go back to calling him the lovechild of Mickey Mouse and Casper. [PE]