Alicia Keys Finds ‘Another Way To Die’ With Jack White 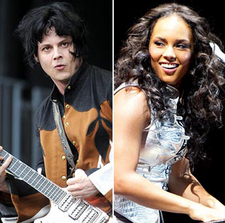 Having a sexy mocha-hued chanteuse sing the opening song for a James Bond movie is nothing new (see Shirley Bassey, Gladys Knight and Tina Turner), so it should come as no surprise that Alicia Keys's vocal stylings will be blessing the opening track for the upcoming James Bond release, Quantum of Solace. What is surprising is that Alicia will be dueting with The White Stripes' frontman, Jack White for the first duet in Bond theme history. While this duo won't be singing about any quantum physics and how they relate to Agent 007, the song, penned by Jack White, does explore themes of mistrust and paranoia that play central roles in the movie's script. In preparation for a November 14th release, expect to hear this song a lot, first during the Coca-Cola commercials that feature the instrumental, and next as the duo perform it worldwide at several of Quantum's premieres, including a live performance in England with the royal family in attendance. Looks like Alicia will continue to rack up more "firsts" as this year and her career continue to do quantum leaps of their own.
Alicia Keys & Jack White: "Another Way To Die" (snippet)

TAGS:  alicia keys, audio, jack white, the white stripes
Previous: How to Make An Election Boring — In Two Easy Steps! Next: Maya Azucena Wants Us To ‘Get It Together’