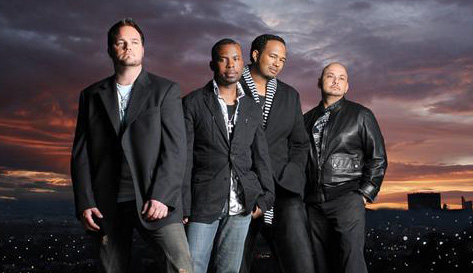 Although most people probably only know All-4-One as the mid-nineties R&B group that sang the hit "I Swear," they have been steadily recording for years. Solo projects have kept the members busy between albums as well. Delious Kennedy has been performing both on Broadway and solo with another band, and Jamie Jones co-produces with The Heavyweights who most recently worked on Wayne Brady's upcoming album. The Los Angeles-based group first became popular singing a capella on "So In Love" and went on to win a Grammy for "I Swear."

Which is completely obvious, but at least they are fully aware of the
shift to solo dominance in R&B over the last decade. Hopefully Peak
will give a great amount of support to All-4-One. With the most recent
release of Motown: A Journey Through Hitsville by their contemporaries Boyz II Men
doing fairly well, perhaps there is a shot. All-4-One is set to put an
album out sometime next year. Still, it's hard out here for an R&B
group. [SR]