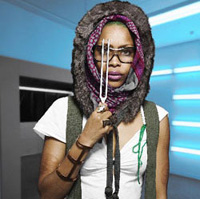 After her concert in Los Angeles for the Vortex Tour, Erykah Badu gave an exclusive interview to Tunji from Inverse that has just been posted on Okayplayer. Although she looks semi-terrifying and appears to be finding lucidity between exhaustion (the interview took place after her performance at 2 am) and highness, she gives some great information about the tour and her eagerly anticipated follow-ups to New Amerykah Part One: Fourth World War. Intercut with some concert footage are some funny quips about how she and The Roots mess with each other's sets, and some information on who she's collaborating with on New Amerykah Part Two.

She mentions Jah Born and individual members of Sa-Ra producing on Part Two, as well as the inclusion of Bilal and possibly Andre 3000 on some songs. Since this interview took place in June there's no telling how much has changed or when we will all finally get to hear her next installment. Sensing the anticipation even then, she assures us that the album is coming and tells us to hold on. We're holding, Erykah. [IH/OP]