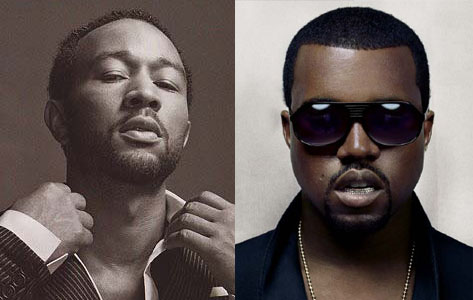 The build up to John Legend's new album Evolver has been pretty consistent. With the release of the great "Green Light" and the so-so accompanying video earlier this year, and working in conjunction with iTunes to have the biggest Complete My Album launch since the introduction of the feature (through which an exclusive remix of "Green Light" was recently made available), the hype machine is in full effect. Now making the rounds online is a radio rip of "It's Over" featuring Kanye West. After getting through the initial DJ drivel, the song itself is kind of banging. This despite the fact that Kanye's verse is infected with Autotunitis. It's a good look to release these collaborations but hopefully his solo joints are even better. If the entire album is as good as these two tastes we've gotten so far, it should be solid. We'll have to wait until October 28th to know for sure.

TAGS:  audio, auto-tune is the devil, john legend, kanye west
Previous: Another Helping of Eric Benét Next: Morning Soul: Every Day Is Christmas and Every Night Is New Year’s Eve