Maxwell Tickets Are How Much? 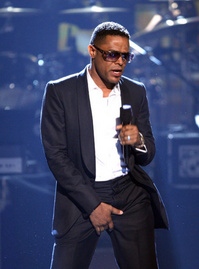 This morning on Twitter I had a minor major meltdown when I ranted to whoever would listen about my utter disgust and sheer dismay at the price of Maxwell tickets for his upcoming concert tour stop in Washington, DC. As any reader of this fine blog knows, I. Love. Maxwell. With every fiber of my being. But I happen to love my money more. And with premium seats for his newly-added second show at Constipation Constitution Hall going for a whopping $196.50 -- that's $175.00 for the ticket plus $21.50 in fees (oh, and a $25 increase over the first show) -- my money will be staying in my pocketbook because I couldn't in good conscience bring myself to make that purchase. Excuse the hell outta me for being on a budget.

With the news of the financial crisis that the country is in and many
of us having to rob Peter to pay Paul to make the ends wave at each
other, I'm really having a hard time wrapping my mind around the ticket
prices in general for Maxwell's tour.
From LA to NYC, the "good" seats are going for upwards of $100. For a
greatest hits tour? That's crazy to me. The suits at LiveNation or
whoever is responsible for this tour have seriously fallen and bumped
their heads. What I almost paid to see Maxwell for a couple of hours at
a sub-par venue with poor acoustics and no parking is more than what I
paid back in January to attend three nights of the Air Jamaica Jazz
& Blues Festival in Montego Bay, Jamaica!

But what do I
know? Venues are selling out from chilly Chicago to hurricane-ravaged Houston and more shows are
being added due to the high demand. So clearly there are many who can
afford to see Maxwell on his comeback tour -- just not me. Don't get it twisted, I had my credit card in hand this morning, with a pretty decent seat waiting on me to press the "buy" button, but I couldn't do it. Call me
cheap. Call me a fairweather fan. Call me whatever you like, but I
refuse to go into debt for one night of Maxwell magic. Suze Orman would be proud.

Yes, it
pains me that I won't be attending this show because I have a long
history of seeing Maxwell when he's come through my city. I've seen him
live at least six times. I'm that chick who camped out at the Kemp Mill
at Metro Center a couple hours before they opened and got rewarded with
front row tickets. (And, yes, gasp/swoon I touched the man ... twice.)
However, this time around the closest I'll be getting to seeing Maxwell
on stage will be watching the bootleg recordings on YouTube that will
inevitably pop up online in the next few weeks. At least then I know my
ISP bill will be paid.


TAGS:  "recession blues, are you crazy?", concerts, maxwell, suze orman
Previous: ‘Pave A New Road’ With Eric Roberson (On His Birthday!) Next: Morning Soul: Can Tell You Wanna Boogie