What Was to Blame For Michael’s Absence at the BMI Awards Last Night? 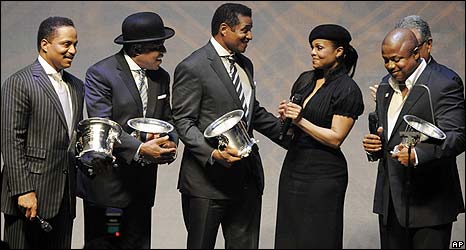 Last night the Jacksons were awarded the lifetime achievement BMI Icon award during the BMI Urban Awards ceremony held in Beverly Hills. Tito, Jackie, Marlon, Jermaine and Jackie were all in attendance. The ever elusive Michael, however, was nowhere to be found. When asked about where his brother was, Marlon responded:

"I don't know...I think he's in Egypt riding a camel or something."

If true, Marlon's speculation would also disprove sunshine and moonlight as causes for Michael's absence as well. None of this diminished the moment, one that was shared by parents Joe and
Katherine and culminated in the presentation of the award by sister
Janet. There was also a performance medley of some of the groups greatest hits, including "Can You Feel It" and "I Want You Back."

Although Michael's propensity for erratic behavior is likely the only culprit for his no-show last night, I am actually holding out hope that it can all be blamed on the boogie. [AP]