Home Pause For A Cause 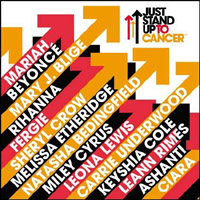 The cause? A great one. The song? An empowering one. The live performance? A ridiculous one.

After reading about this in the comments section on the "Freedom" post last week, I would be remiss not to mention the song "Just Stand Up!" It stands as a great example of #3 on that list but cannot be compared to or contrasted with "Freedom" outright. It does deserve its own post, though. The performance video of "Just Stand Up!" during the this past Friday night's Stand Up to Cancer telethon after the bounce.

I was willing to give the song a chance until Miley Cyrus started in the first time. Why was she shouting? By the time Mariah
began her whisper-yell singing, the song was doomed. Those, and the faint
vocal track in the background, were among a slew of unfortunate elements during an
underwhelming performance.

Getting that group of women together
must have been quite a feat (minus original contributors Melissa Etheridge, Sheryl Crow, and LeAnn Rimes and plus Nicole Scherzinger). It's a shame that they had to depend on
octaves, simple harmonies and vocal theatrics to make it work. And
seriously, Cyrus derailed the entire song.

"Just Stand Up"
[iTunes]
A portion of the proceeds from sales of the song will benefit Stand Up To Cancer.


TAGS:  ashanti, benefit, fergie, leeann rimes, leona lewis, mariah carey, mary j. blige, melissa etheridge, miley cyrus, natasha bedingfield", rihanna, sheryl crow, stand up to cancer
Previous: The Retro Kidz are Fresh for ’88 in ’08 Next: ‘Get Up’ Then Get Down With Mary Mary