Common Promising New Album, Kanye Will Likely Have To Do The Same 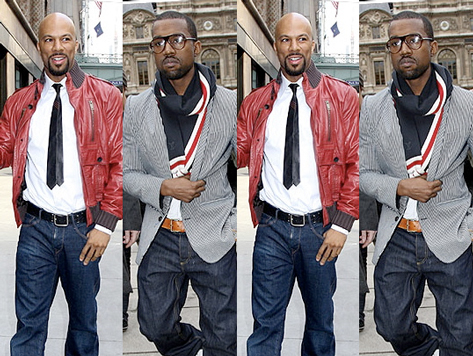 With Invincible Summer, er, I mean Universal Mind Control, set to drop next month, it's a bit odd to find Common talking about what his next project will be, isn't it? The Believer, an LP that he was set to begin working on until the "dance music bug" bit him, is still, according to Common, in the works. But I have to wonder if his PR rep is freaking out just a bit since isn't announcing a newer album when your just plain new one is about to drop saying a whole lot about the current project?

Yes, on the one hand it can be interpreted that Common is a man who stays in the studio or in rhyme ciphers, constantly honing his skills into an emcee that could slay all others in a single bound. But it can also be interpreted that Common maybe knows something that we don't. Namely, that this album might be a little too left of center for most of our tastes. I'm not going to say anything by implying that UMC may suck as hard as Electric Circus did, but I will say that Common is not the go-to-man for dance anthems. Couple this with the extensive collaboration with The Neptunes on UMC, and I have the sneaking suspicion that this will be a Neptunes album that Common is just being featured on, you know, since Pharrell can't rhyme. We'll all have to just wait, however, until we hear the finished product next month.
In related news, Kanye West has said of his upcoming 808's & Heartbreak:

"I'm not doing this to only have two people have this in their car," the rapper told radio jock Big Boy. "I'm doing this to make the most incredible album you've ever heard.

And if it's not that, I'll go in the studio and make another one," he finished.

Speaking from someone who was actually feeling the live version of "Love Lockdown," I have to express my utmost disdain for the total Auto-Tunization of his album. I know Kanye is mostly all talk and braggadocio, but something about this new album makes me believe that, following his logic from the quotation above, we should be expecting an album from Kanye right around the same time that Common drops The Believer.

Kanye West: "I'm Not Doing [This LP] To Only Have Two People Have It In Their Car" [XXL]